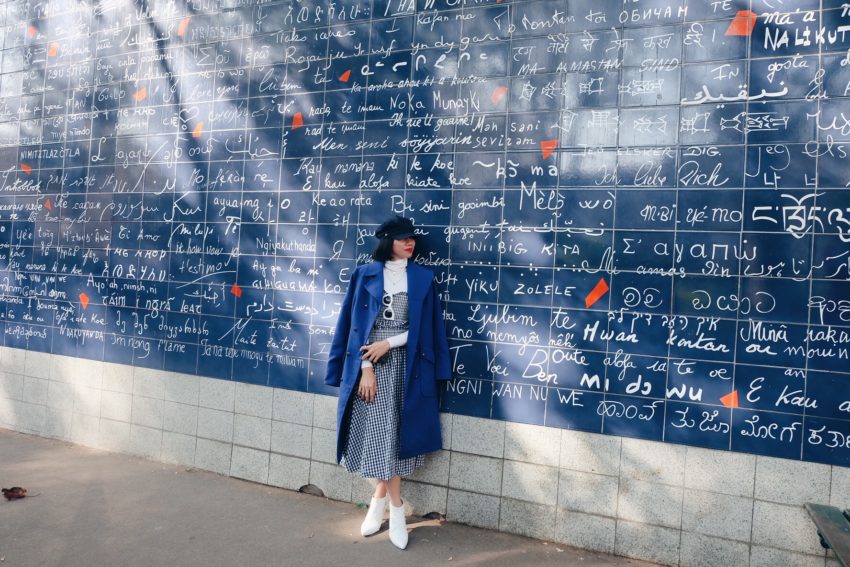 One of the many questions I get whenever I post pictures of my solo travels is, who took your photo? In last post’s topic of doing DIY vs joining a group tour, this problem definitely falls to the cons of doing a DIY trip. It is a disadvantage yes, but one that can’t be overcome. Because if there’s one thing I learned in my solo travels, it’s that people are more than willing to take your photos if you’re dressed up nicely/ properly.

Arriving from Brussels the night before, I carefully selected my outfit for this particular day (I can sense some already eye-rolling

at this statement, lol

) because I was supposed to have a business meeting located in this impressive district in Paris. Unfortunately, the meeting was postponed to another day and so I proceeded to visit my haunts in the city. After spending 10 days in Paris last year I’ve pretty much checked the bucketlist of must-sees here but it wouldn’t hurt seeing them again. Take for example my first stop: the romantic Montmartre where you can find the famed Moulin Rouge and Sacre–Coeur. As I go on with my IT below, I will share tips on how my photos were taken:

1. Volunteer. Spot a solo traveller and graciously offer to take his/ her pictures. Then nicely ask to return the favor. It’s pretty much common to find fellow solo travellers these days especially a woman as I have mentioned in this previous post. These pics in the I Love You Wall of Montmartre was taken by a female tourist from Brazil. I found out coz I asked her to pose where her “I Love You” language is located. Unforch, it’s all the way up in this wall. When I say gracious, take more than just one photo. Sometimes, it doesn’t hurt to chat them up a bit too you know. You might just get yourself another IG follower or sometimes a company to your next location. Or sometimes, you’ll just be amazed at how someone can go all out for their picture when you show them you’re a dedicated shooter (as what happened to a woman I met in Vienna :D) and it’s so much fun.

Another way I did this was during a Seine river boat cruise last year. I took a candid photo of again, a solo traveling Korean girl and atleast for me I thought the photo and bokeh was amazing so I struck up a conversation with her to show her the photo and immediately transferred the photo via Airdrop. We became each other’s company during the cruise and took photos of each other. 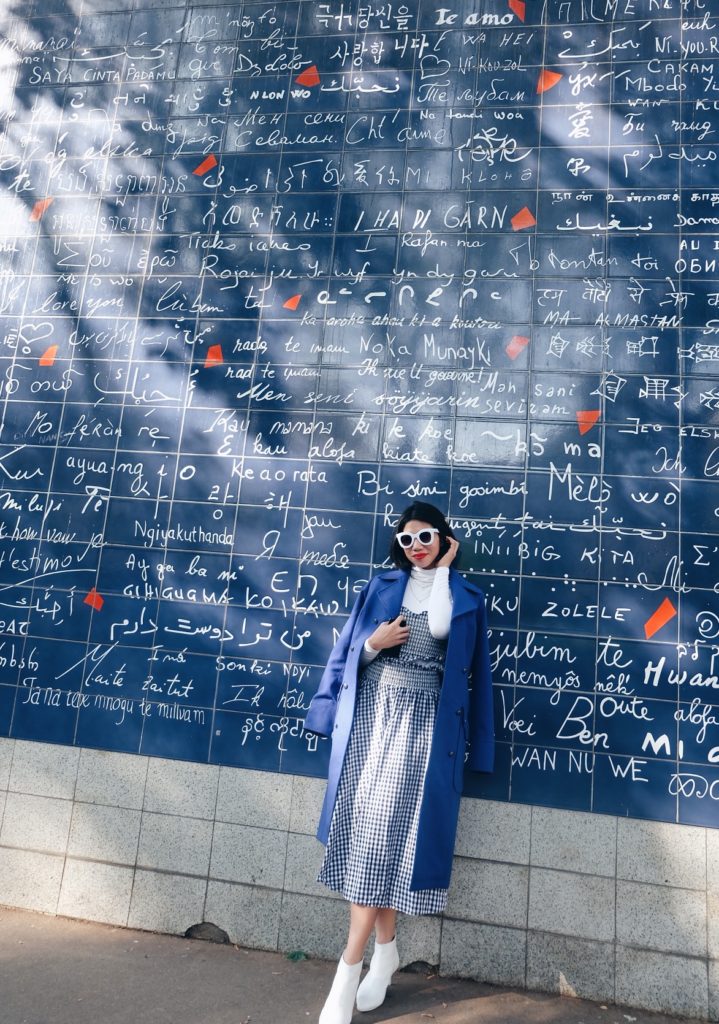 2. As I am not a big fan of selfie sticks, I use tripods/ alligator clips for my iPhone or set up my Fuji camera for landscape photos. You’ll need some chutzpah to do this though. My next stop was this neighbourhood area with an Eiffel tower view in the 7th arrondissement that’s quite tricky to get a shot of if you’re traveling solo basically because it’s a residential area. Meaning, people passing through there have their own business and will not understand why you wanna have a photo taken of their everyday view. Lol. After standing for a few minutes there setting up my camera on an elevated block and failing to get the full height of the Iron Lady, I gave up and just took my last resort. Selfies! 😀 And then, something happened. One of the woman from this selfie below, chatted me up, complimented me on my outfit and offered to take a photo of me. And they say Parisians are snobbish people! She was very nice to take a few shots and here’s my pick below. 😀 It’s not that bad. Okay, so maybe you’re a bit choosy on your photos and you want a super likeable IG-worthy pic lol so my next tip is… 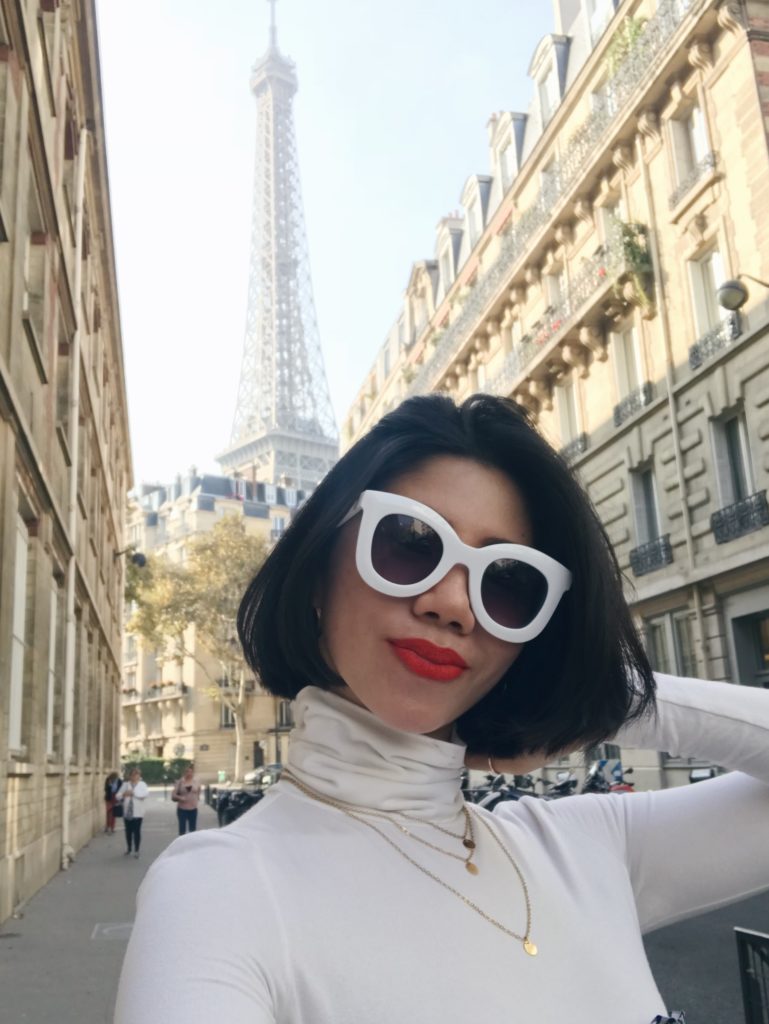 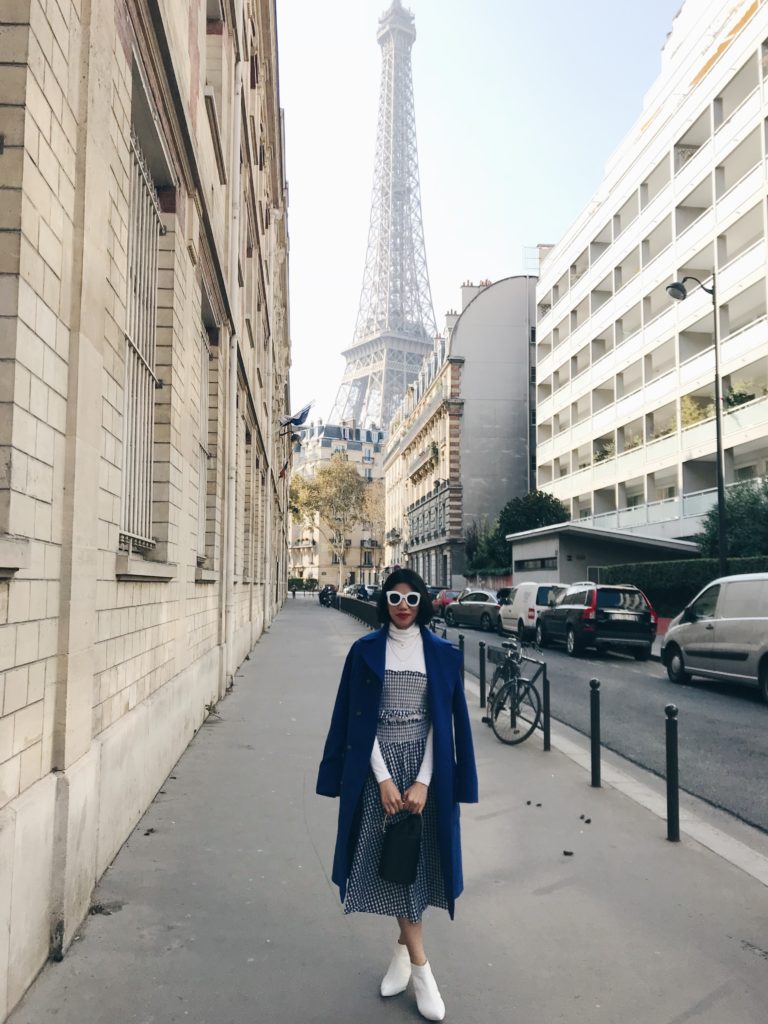 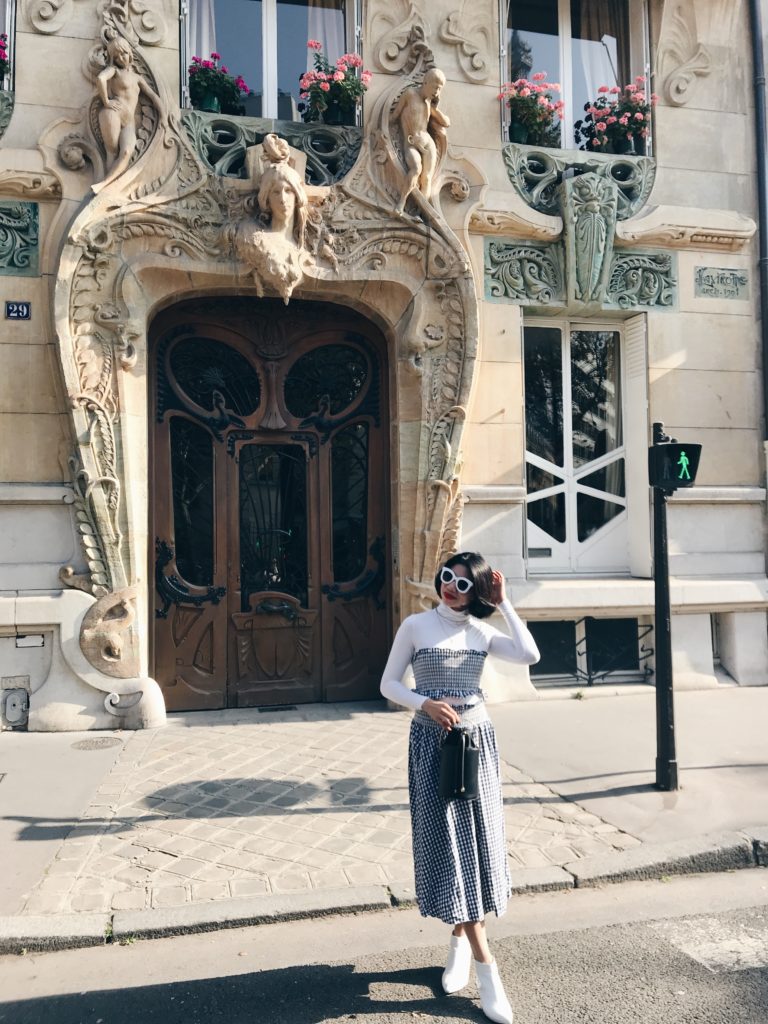 3. Approach a professional photographer and ask him/ her to take your photo. Not that I’m on a lookout for them all the time 😅  but when I found this beautiful spot to take a picture of the Eiffel tower of by the Seine river, a photographer (atleast she seemed like a pro to me) wanted the same angle and asked me if I could give her the space. I acquiesced but not without asking a favour in return. I’m probably a Canadian for this but as I usually open with the words “sorry” when asking someone to take pictures of me,she dismissed it and say that it’s totally ok. It’s like saying, “Hey we’re in a beautiful place called Paris! It’s normal.” While other co-tourists may not be that willing to give your photo their best shot (but I swear not me, I’ll be like your dedicated best friend haha), photographers take pride in their shots so this is your best call for getting that more than 100 likes photo in IG. Lol. But if you’re really really lucky here’s my last tip… 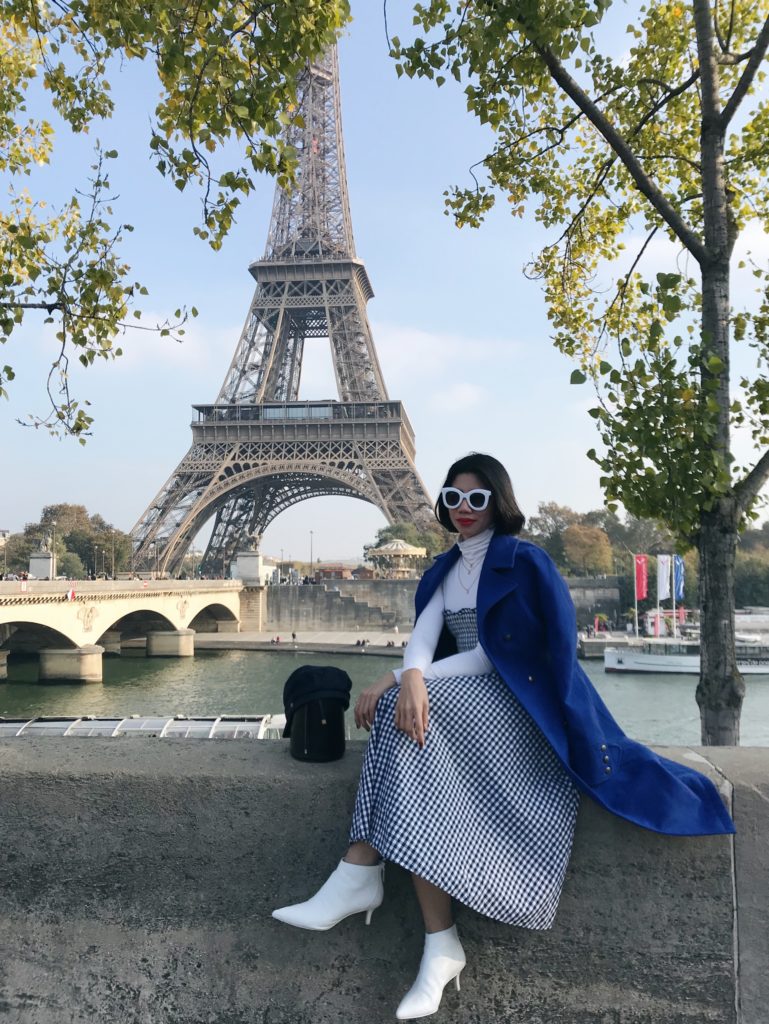 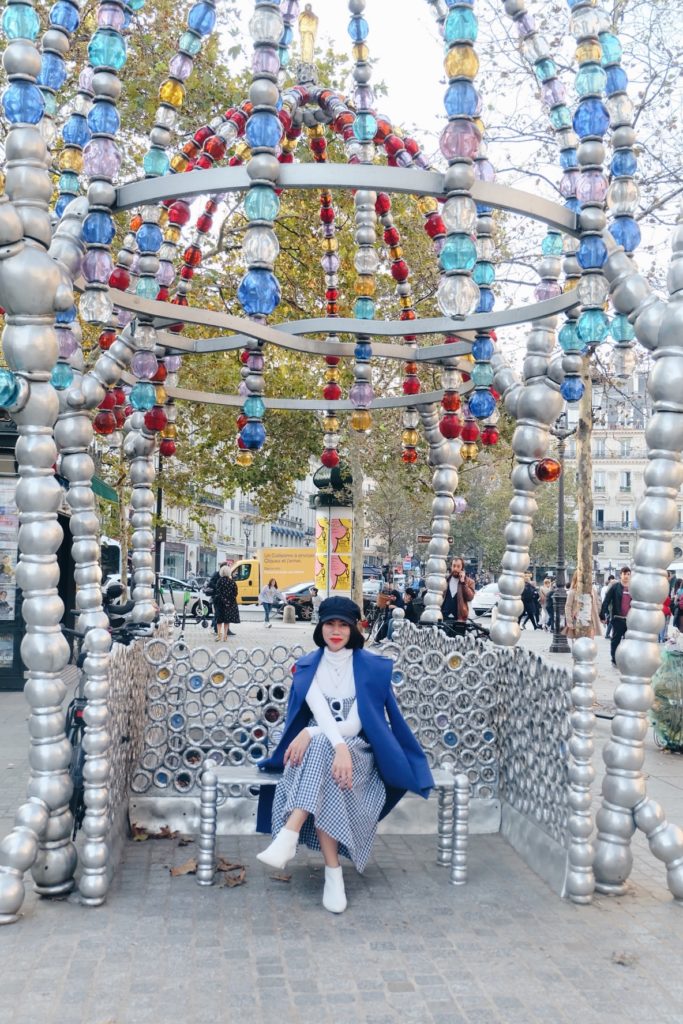 4. Be a model for photographers. Sometimes I do fantasize about this you know, I swear. That maybe some professional photographer on a tourist destination would be in need of a subject and that I happen to be conveniently present in a wait, oh a very thoughtful matching outfit to the backdrop. Lol. But this time, after walking what seemed like the whole city of Paris from Montmartre to the Eiffel Tower to the Seine River, I just wanted to rest my feet in a nice garden and decided to do it in Palais Royal Garden. This way I could get to see the Louvre again as it is just next to it. I was passing by the very IG-worthy place called Les Deus Plateaux when someone stopped me on my tracks.

She explained to me about the campaign going on for this jewelry brand called Red Line in Paris and they’re photographing willing “stylish” people in the area. This is just so flattering that when she asked if it is okay to take a photo of me, I couldn’t say yes fast enough. Lol. Thhis photo was also posted in their IG story and Facebook as seen here and here. And so that’s the story of how I got a photo in Les Deus Plateaux – the very same place I struggled to have a self-photo last year. Hahaha. 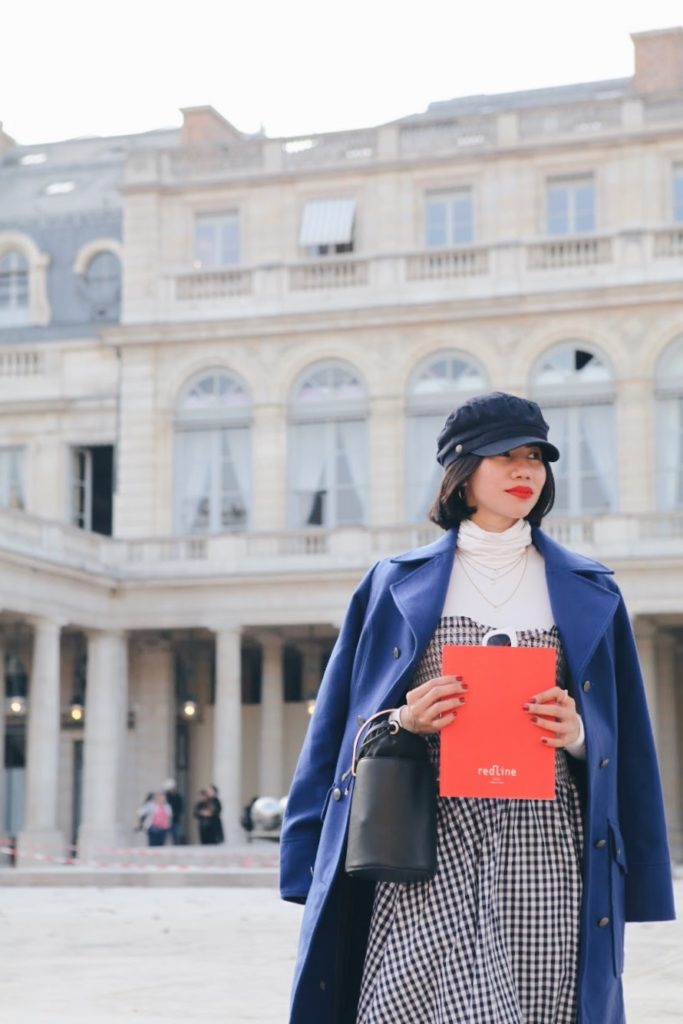 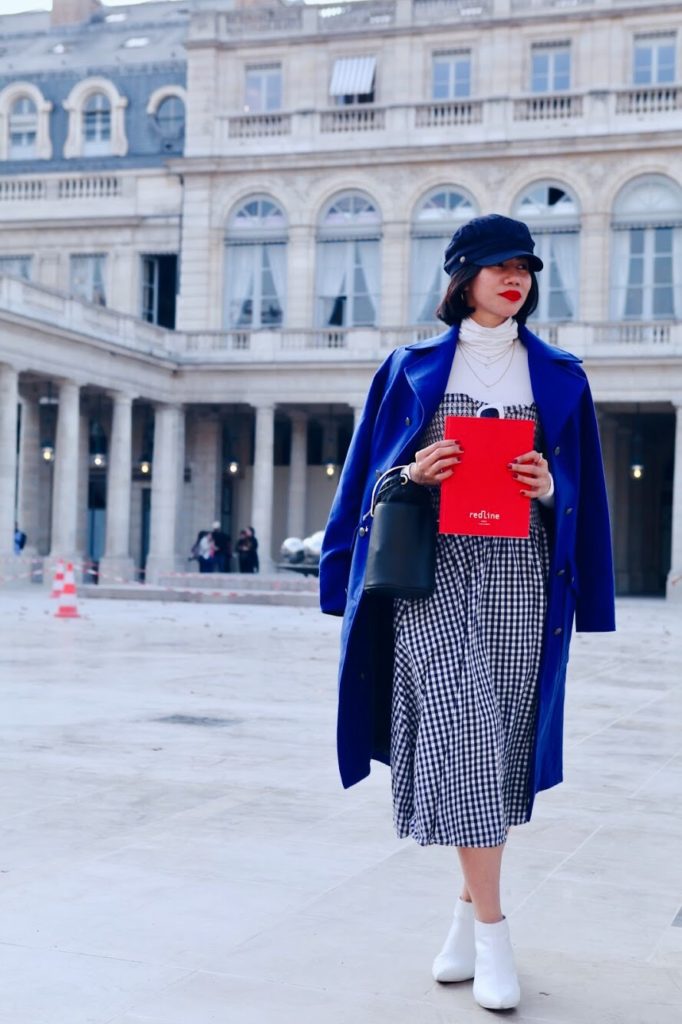 In this recent trip, I encountered women (maybe they’re not photographers per se) who volunteered to take photos of me in my outfits without me asking them and without them asking for a favour in return. It’s really a flattering feeling knowing that my curated selection of clothing makes them do this. Hehe. 😅

To wrap this up, I think we have Instagram to thank for for understanding this next-level-photoshoot culture, no? And remember that whenever you’re travelling, people are just simply in a good mood that it’s totally ok to ask a favour from them. But of course don’t abuse them just like this old Indian guy I met in the tour who wanted to get photos from different angles as if he paid me to do it. 😒 And as I have proven time and time again, people will always be nice to you (women atleast) whenever you’re dressed up nicely. 😀