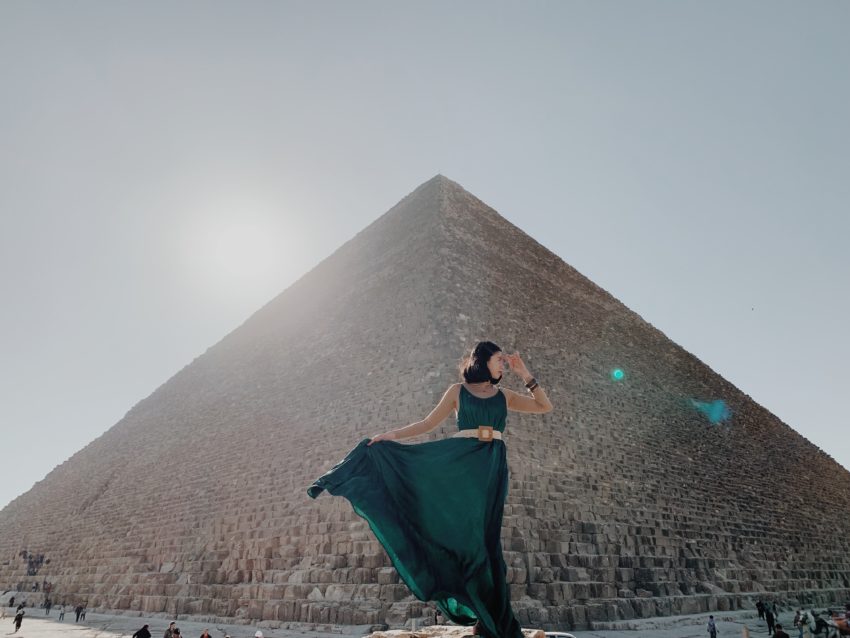 Having discussed Egypt’s topography previously and how this civilization is blessed by the Nile (see post here), isn’t it odd how the Eygptians were so much obsessed with death and the after-life? I mean, if you belong to one of the most advanced civilizations, perhaps you can focus on many other fascinating things concerning the living but nope. There they were – the resurrectionists. Perhaps no other civilizations devoted more of its resources and energy to preparing for immortality than the Egyptians. And the biggest manifestation of that? The Pyramids.

As I have mentioned in a previous post, Egyptians believe that the pharaoh is a god in human form. It is therefore expected that a colossal residence shall be built for the royal dead and in it will be housed all his possessions that will be needed in his after-life. Our tour to Giza didn’t include the tickets to enter the Great Pyramid of Khufu but considering my claustrophobic nature (think ducking in cramped passages with other people in a single file) and a strictly 45-minute free time given to us to explore the only largest stone building ever erected in the world , that’s easily out of the question.

I mean, seriously, 45-minutes just to appreciate one of the best architectural feats of mankind, the only remaining wonder of the ancient world. SERIOUSLY? That’s just all the time I need for taking pictures! Hehe. Don’t get me wrong. Maybe I did mention about this massive structure being built for the dead but there’s no taking for granted here how the 2.3 million blocks of stone were hauled on top of another and built in precision during those days without any machines aiding them. Even as I finish a book proposing how the great pyramid was “probably” built, it’s still pretty much a concept I couldn’t just wrap my non-architect brain around (even as engineer lol!!).

I used the word “probably” because did you know that for a nation of accountants who like to document everything in their walls via inscriptions (you’ll never run out of proof of this in their temples), there’s not a single document regarding how the pyramid was built was ever found! Oh and not only did the word Egyptologist was added to my lexicon during this trip, I learned also about pyramidologists –those who are concerned about the other purposes of construction of the pyramids. They Great Pyramid truly is an ancient work of wonder and I’m so glad that I had a chance to see it in my lifetime. 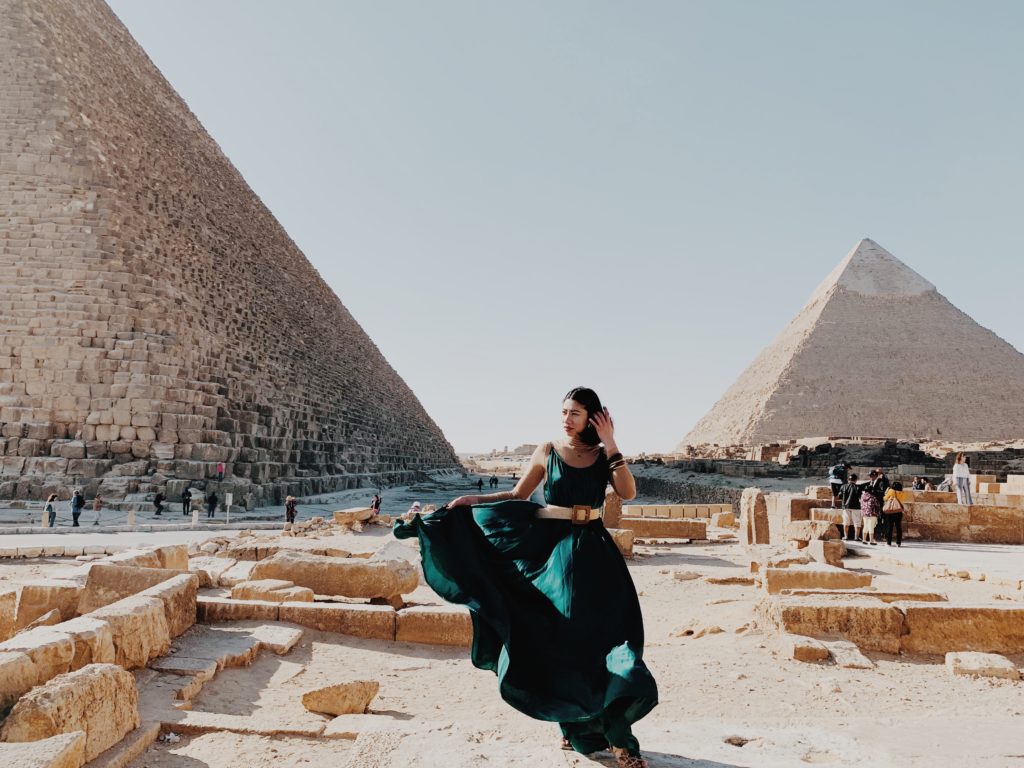 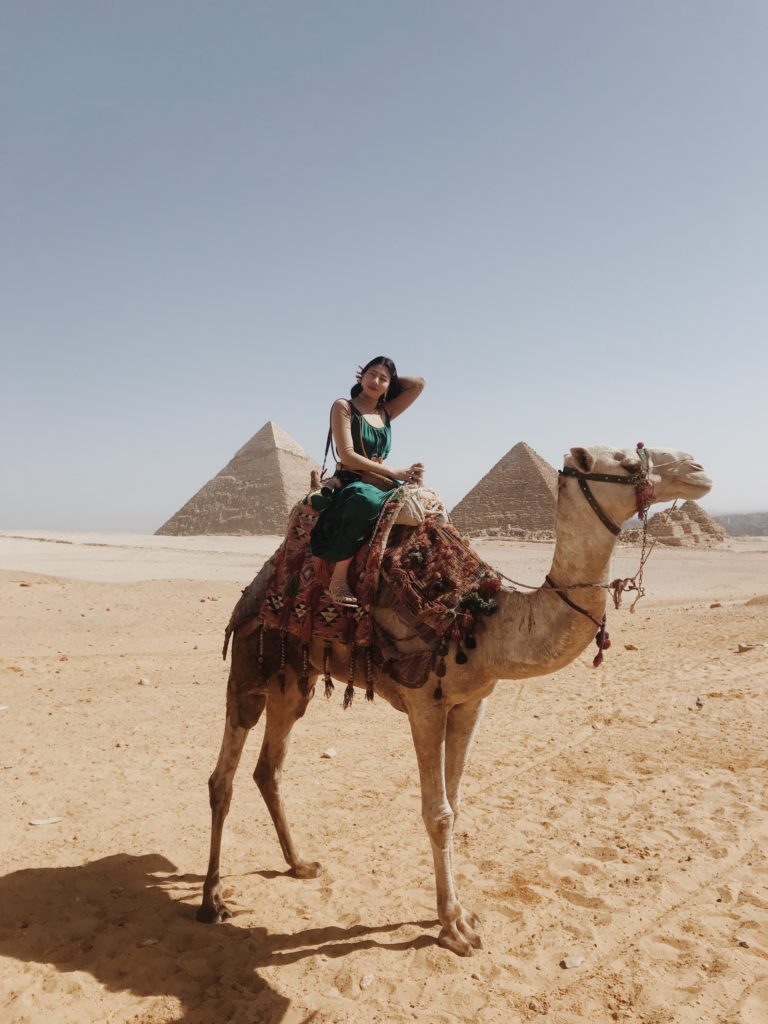 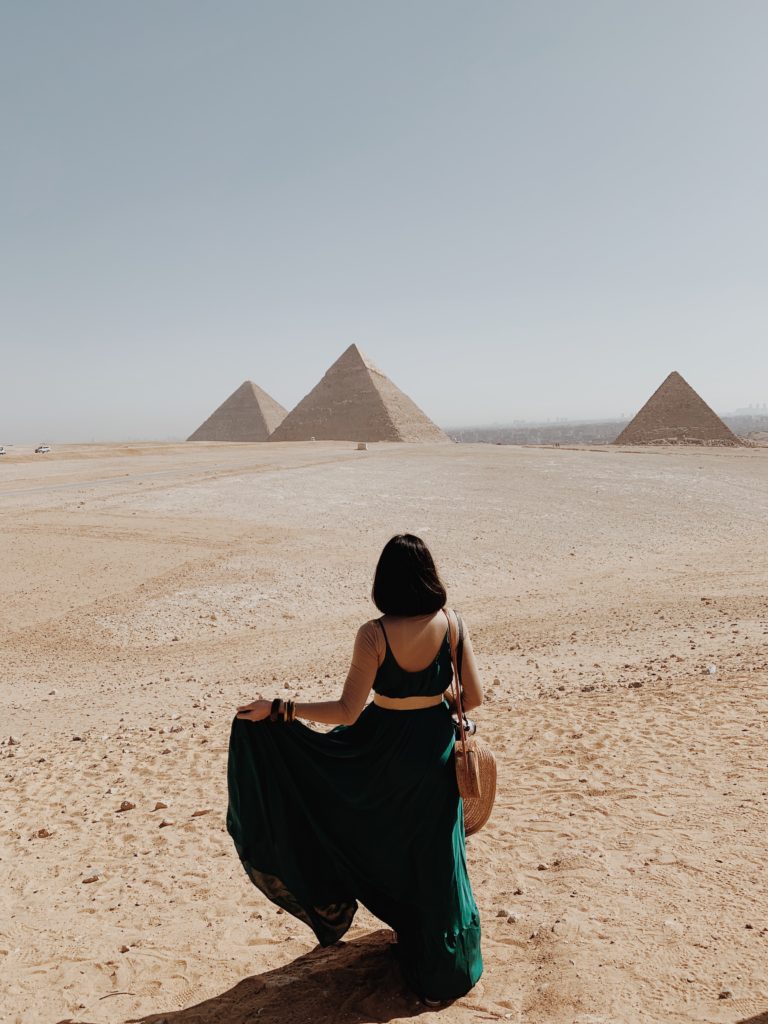 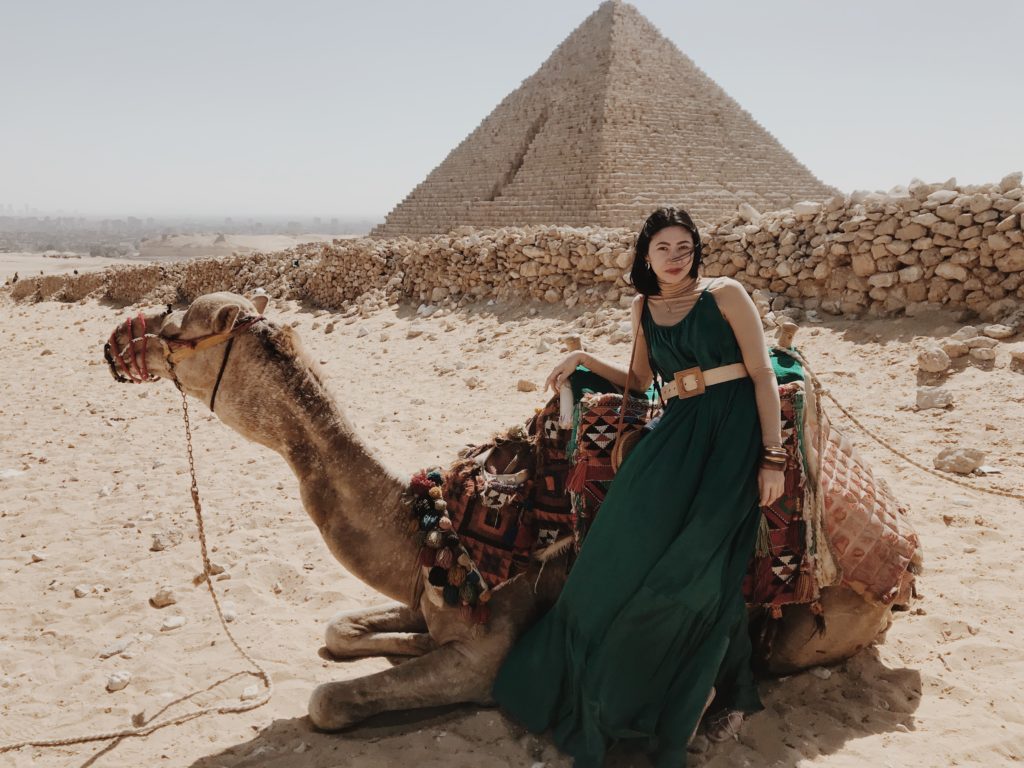 In the same Giza Plateau where the 3 major pyramids are lies also another mysterious figure – the Great Sphinx. About 4,500 years old, it is the largest monolith statue on this planet although studies suggest that it is actually a half-done job. Without exact details of who built it, what it is for and what lies underneath it – the Sphinx is truly an enigma. What a contrast to the all-knowing monster Sphinx in the Greek mythology that kills those who couldn’t solve its riddle! Since sphinxes often appear in pairs, like the Sphinx Alley found in Karnak (see my post about it here), there are theories about a possibility of having another great sphinx somewhere. Ahhh, the mysteries that surround this country! This is the reason why whenever I see something glistening in the desert while moving from one place to another, I couldn’t shake off that feeling that perhaps something is buried in there. Lol. It might sound shallow, but it’s valid. There are still a lot of things to discover here! 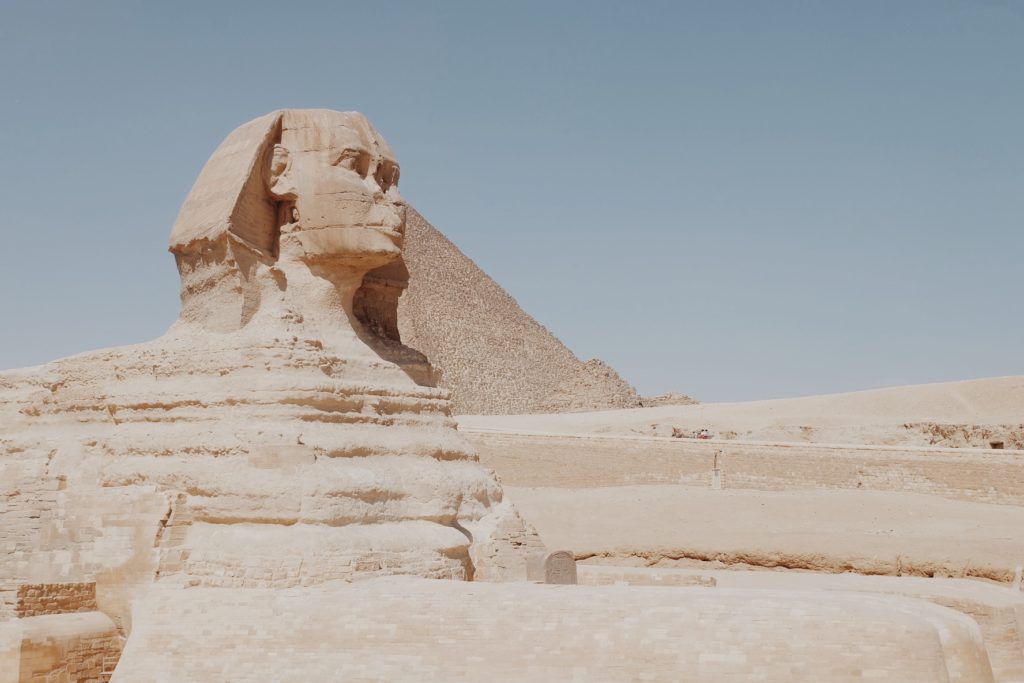 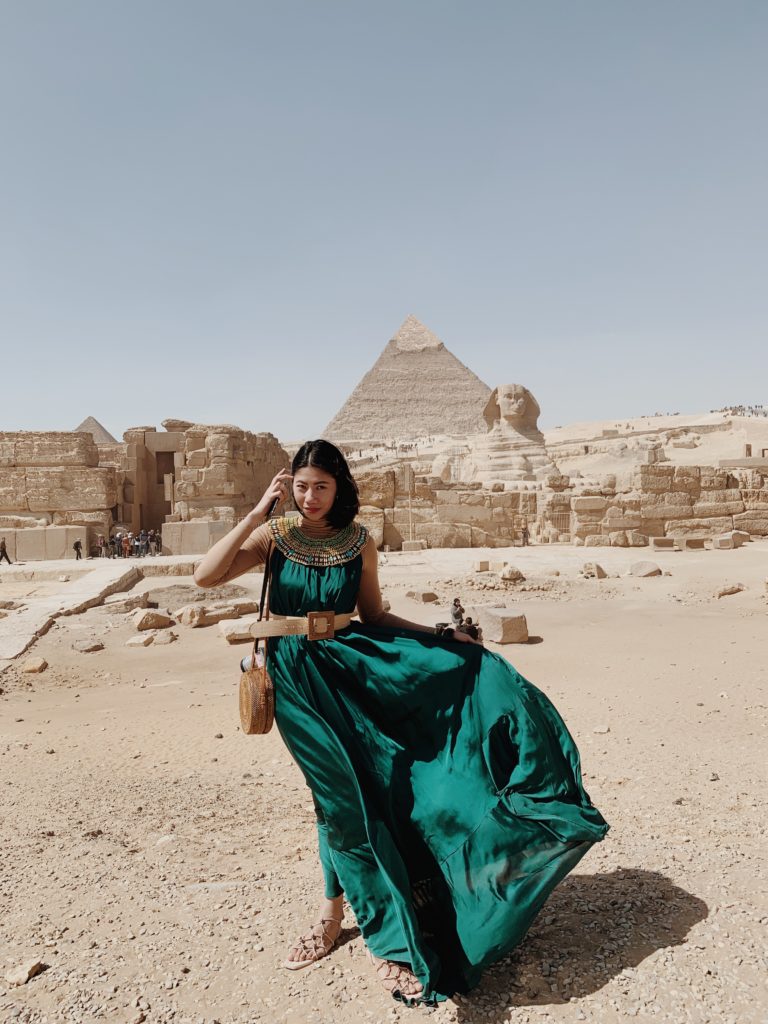 Speaking of moving places, our first day trip included a visit to Saqqara (25 km from Giza) where you could find another archaeological remain – the Step Pyramid of King Djoser. It is the actual first pyramid that used stones (they initially used mud brick for burial places) designed by the architect Imhotep. It is a big burial complex and just like everyone, your favourite would have to be the hypostyle hall with 40 pillars that still looks so elegant after thousands of years! 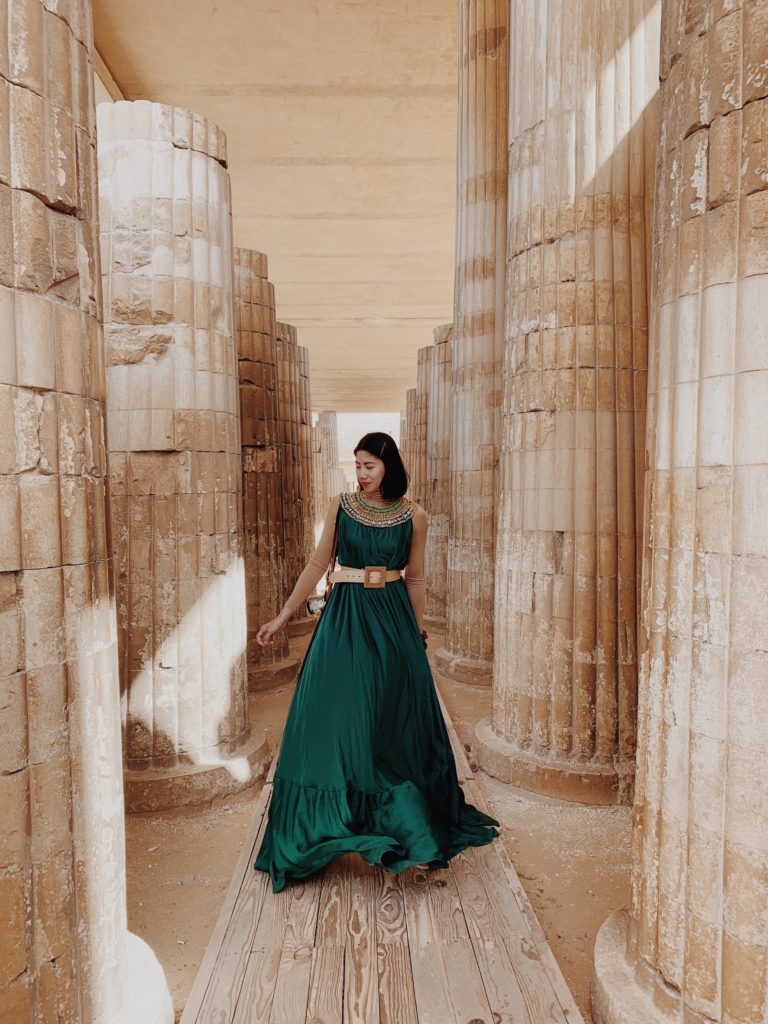 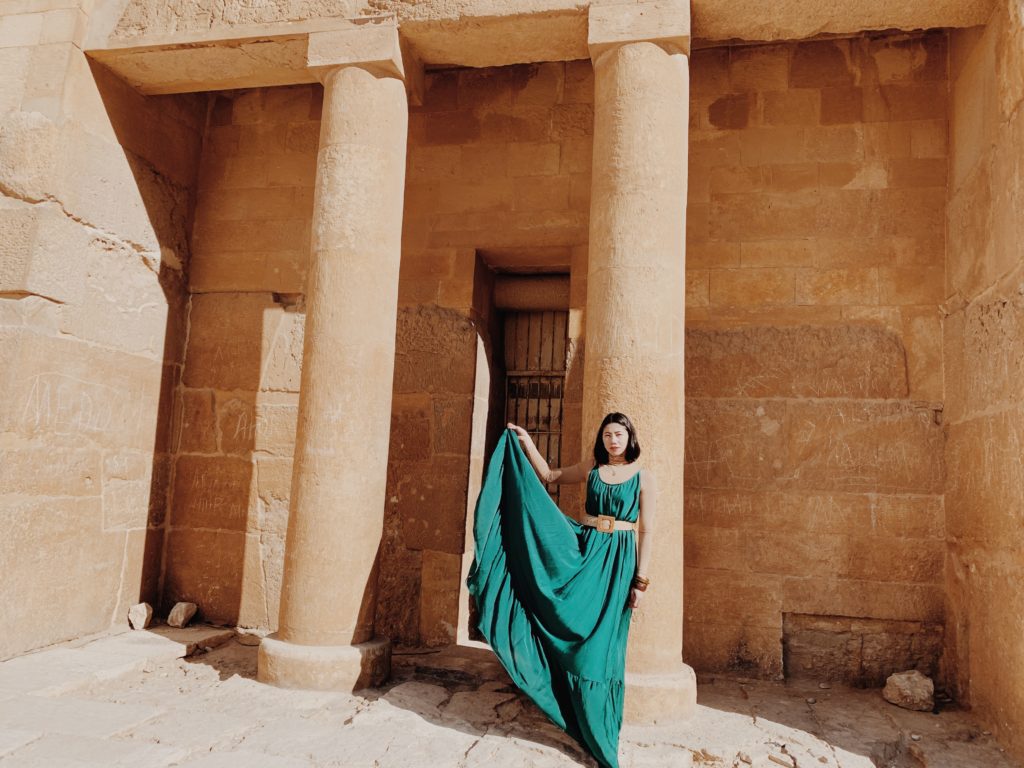 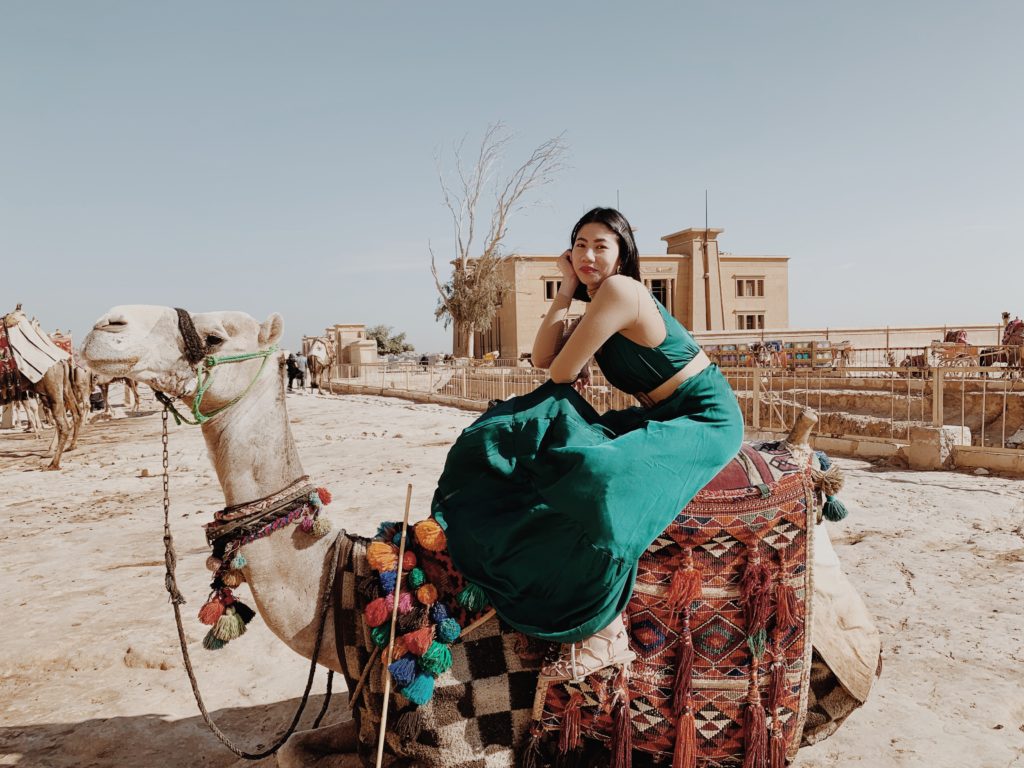 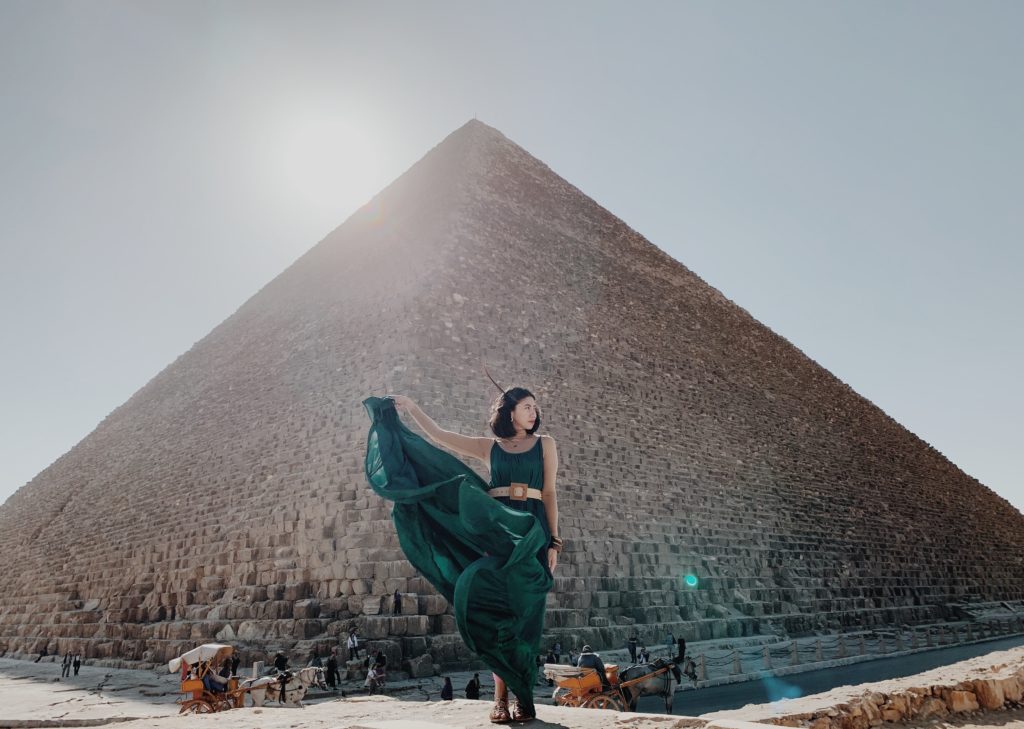 If there didn’t seem to be enough photos for each necropolis, it’s because we’re always pressed for time. It’s like a whirlwind affair – one minute you’re at the bus with that thrill of seeing the pyramids, the next there you are wondering in awe at the giant standing before you and the next moment you’re being hauled away from it only to experience that quintessential adventure of riding a camel and once again, getting near the pyramid. It’s crazy. We’re always on the move. But I truly enjoyed all of them. I am ending my Egypt posts here (awww!!!) but you can always check my previous posts. Thank you, Egypt! It’s been a wonderful learning experience for me! 🙂